Kuburan Terunyan: The Dead Sleeps With Us

After my story on a traditional Balinese funeral, this seems like a rather good follow-up on yet another funeral culture in Bali.

On the shores of Lake Batur, about an hour and a half car ride away from Ubud, Bali, lies a rather peculiar gravesite or some, like the locals call it a village; depending on how you feel about the place.

Kuburan Terunyan or ‘Grave Terunyan‘ is the final resting place for the Trunyan Community.
In this place, bodies of the recent dead are not buried or cremated; they are simply left out in the open to decompose naturally. Skulls and bones are commonplace while different offerings left by the deceased’s families were littered everywhere.
Despite the dead bodies that were lying around, there was surprisingly no smell of decomposition at all. Locals attribute this to the Menyan Taru (fragrant tree), a tree which is said to only grow in that area where its fragrance neutralises the smell of the dead.

The locals even managed to turn the place into some sort of tourist attraction, charging cut-throat prices to ferry tourists over as you are only able to access the place via a scooter or a really long walk.
Tourists were also taking selfies with the skulls which I found rather off-putting, but I guess in this current day and age, most feel that if the picture is not on Facebook, you were never there.

I was frankly rather glad to leave the place as the sun started to set although part of me wanted to stay on and spend more time working the story but in the end, I guess it was just way too creepy for me.

I would not recommend a visit to the place as it is simply a really small area with trees, skulls, dead bodies and camera-toting tourists. But if that is your thing, be ready to barter hard with the boatman for a reasonable price; try telling them that you don’t mind the walk. 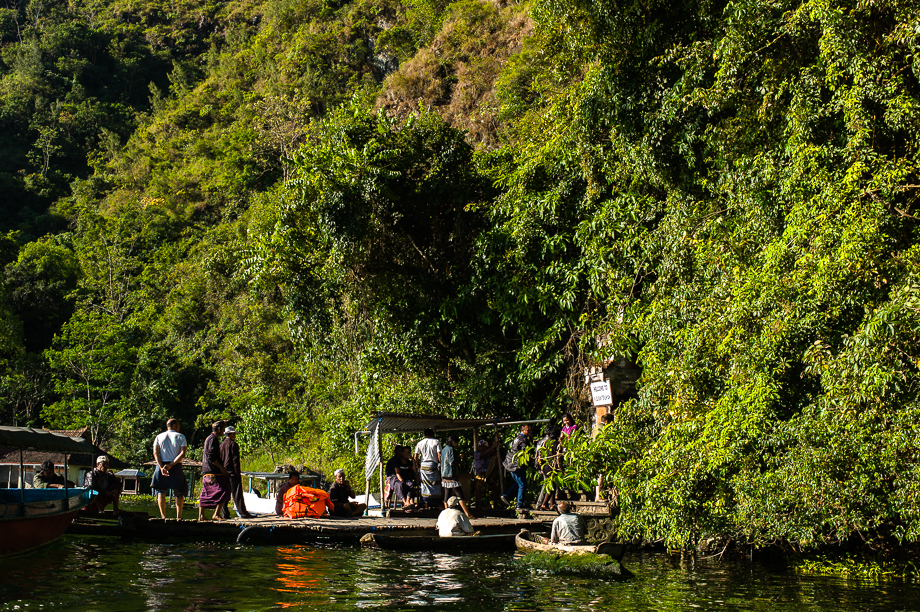 The entrance lies amongst lush greenery

Skulls of the dead and offerings

A photo with the skulls…

Skulls of the dead were on display

The little jetty in front of the village